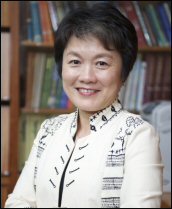 The intellectual property (IP) market has seen tremendous growth over the past two decades, thanks to rapid globalisation, technological advancement and the evolution of the global knowledge economy. Today, IP is one of the most important resources in the global market. What was once a quiet domain of the technology sector has now become a hot spot in the business and legal worlds.

"There has been a remarkable increase in IP awareness around the world, as evidenced in part by the growing number of patent filings and IP litigations," says Alice Ngan, Chairman of the Licensing Executives Society China-Hong Kong, and Director of Special Projects Office at The Chinese University of Hong Kong. "The value of a brand could surge 10 times after it's been trademarked. Today, few established companies can do without a certain degree of IP."

North Asia has a thriving IP environment, with the Chinese mainland the undisputed leader for trademark filings and patent applications. An HKTDC study found that the economic powerhouse led the world in 2010, with some 1.05 million trademark filings, while the United States trailed a distant second, with 280,000. In short, the global surge in industry design filings is largely down to Chinese activity, according to the World Intellectual Property Organisation. 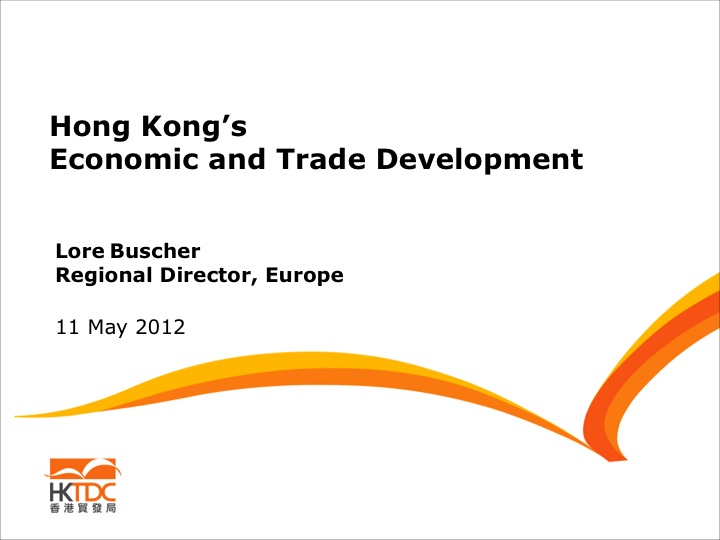 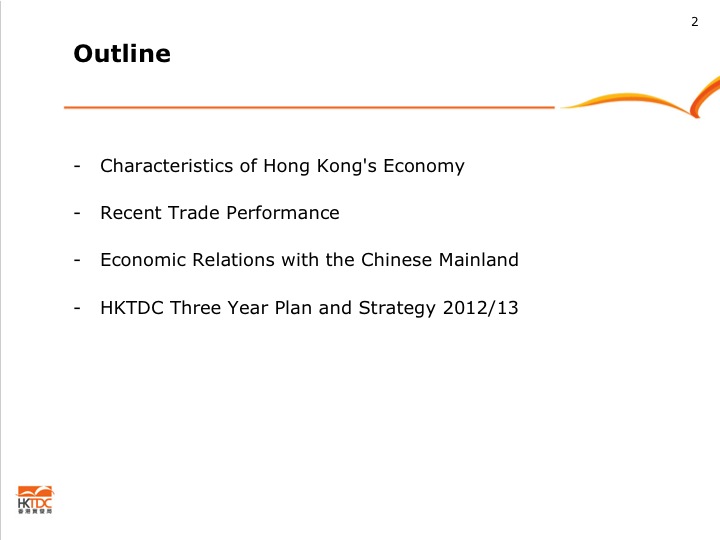 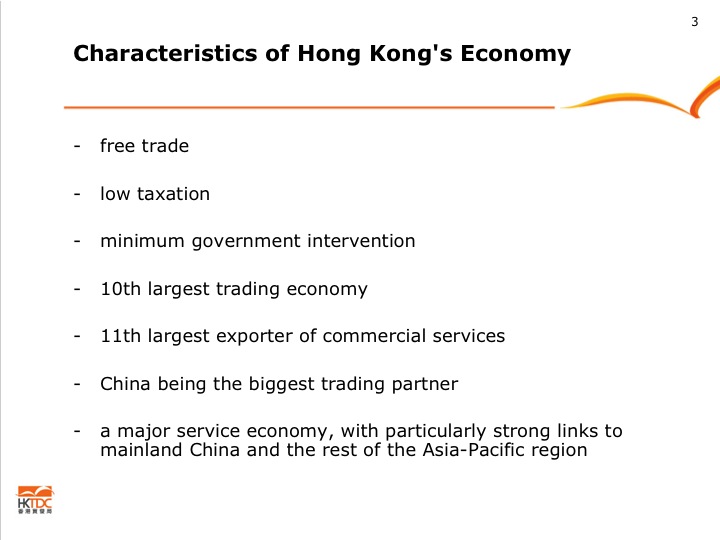 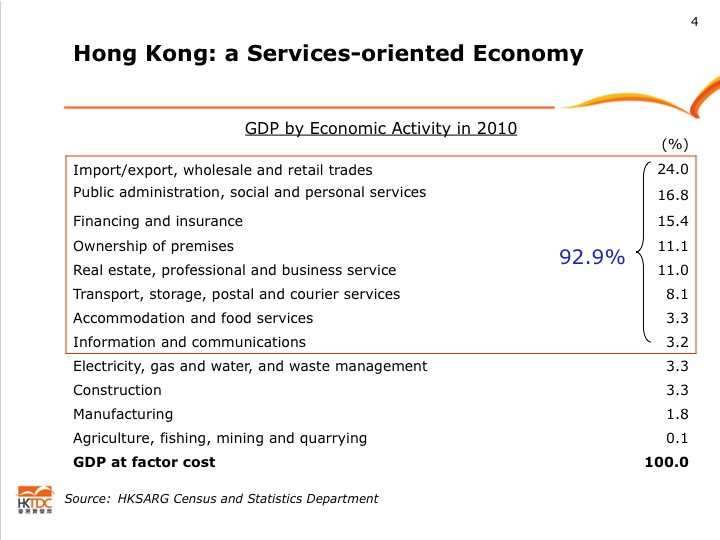 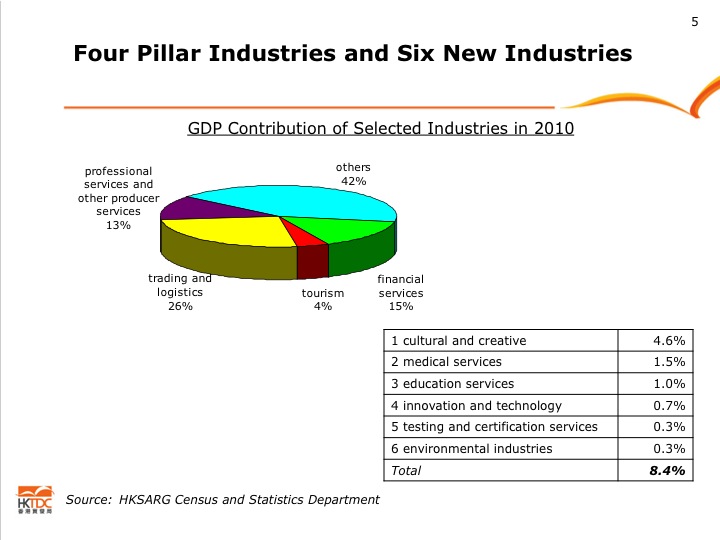 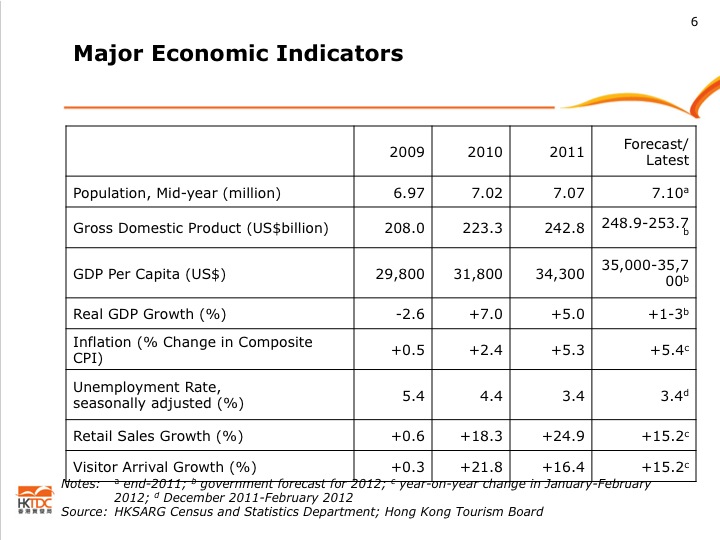 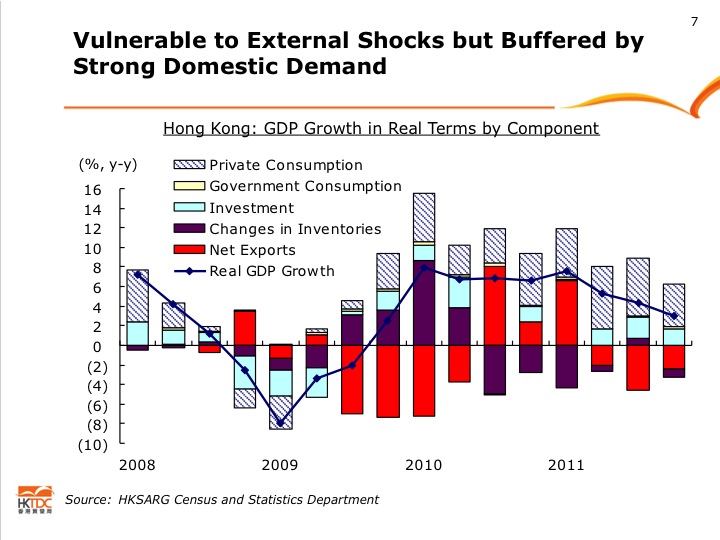 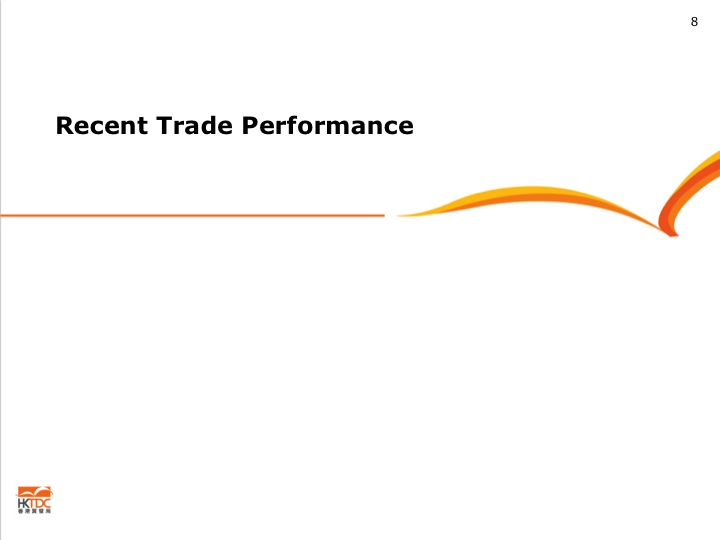 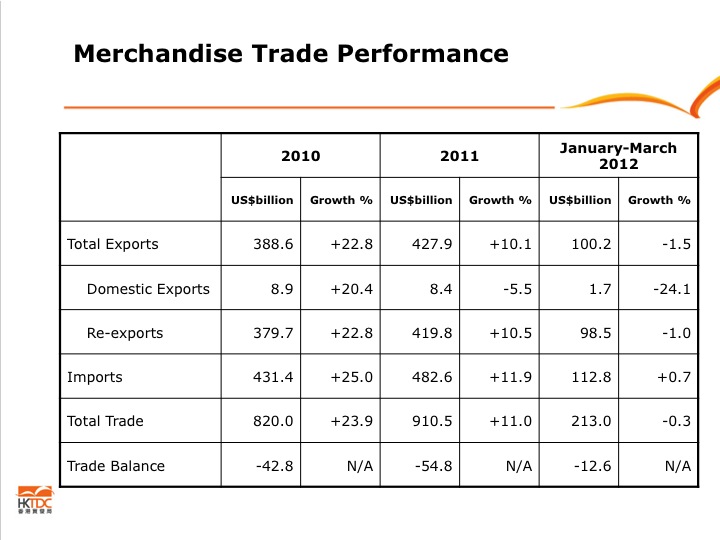 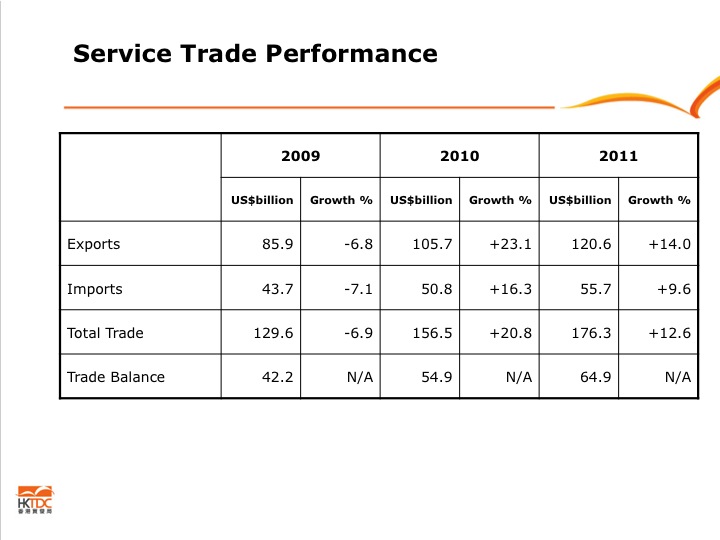 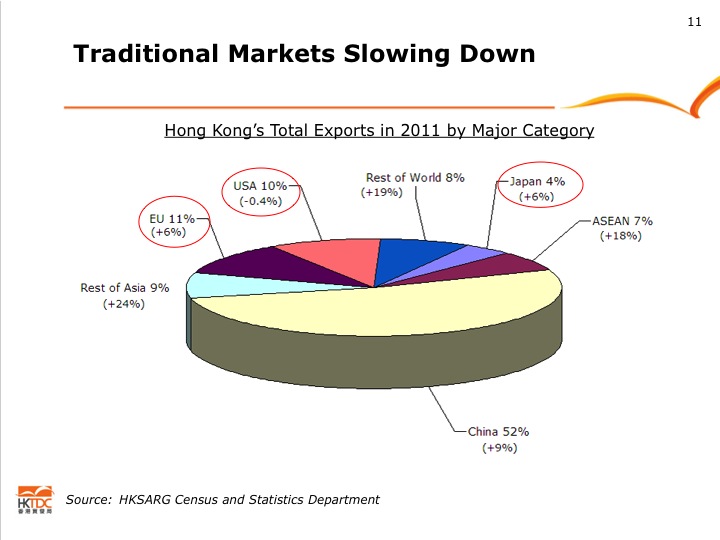 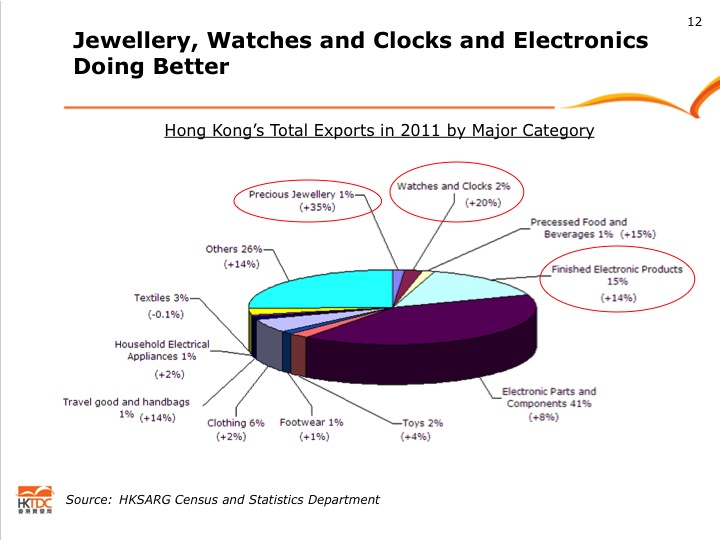 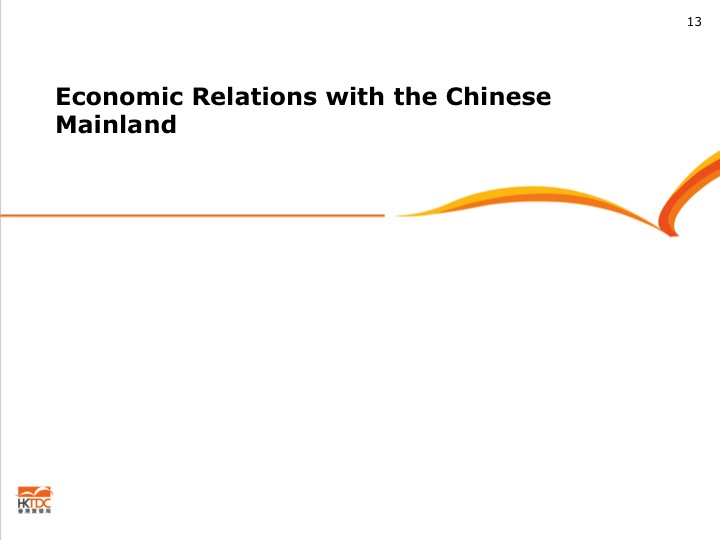 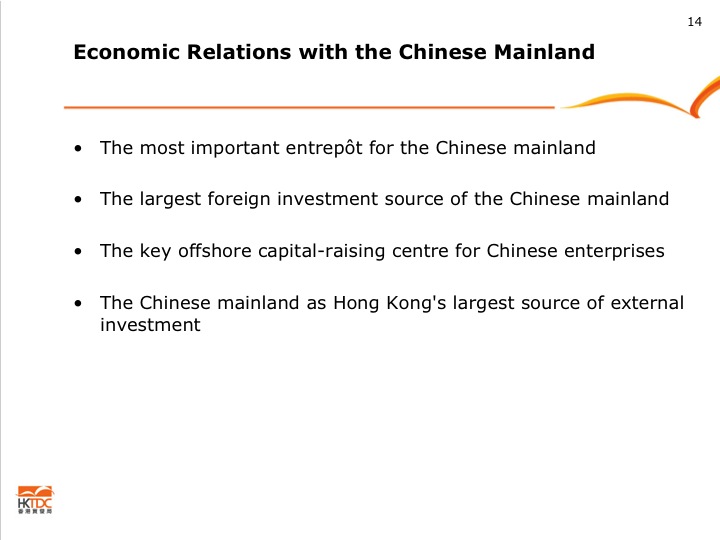 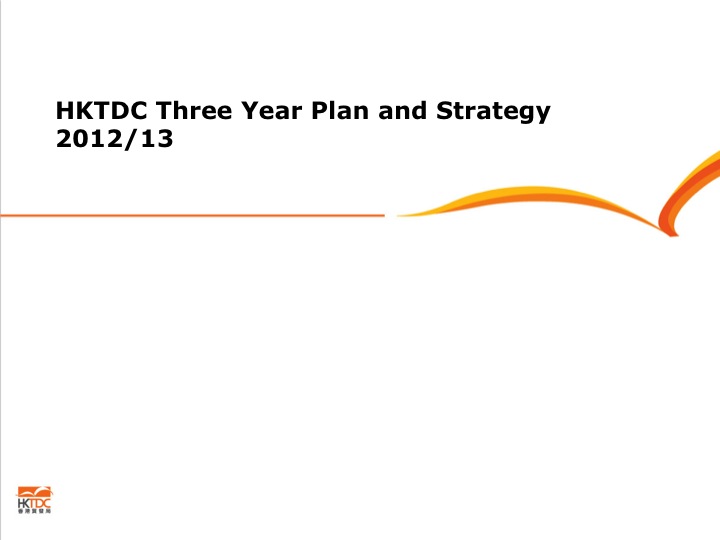 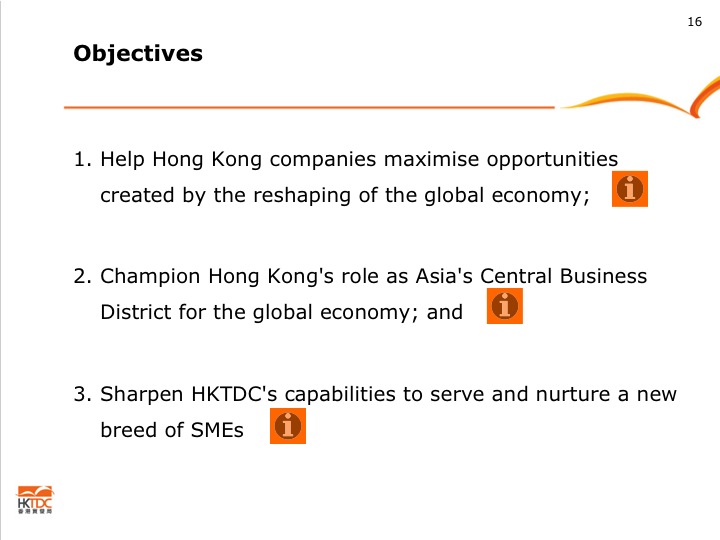 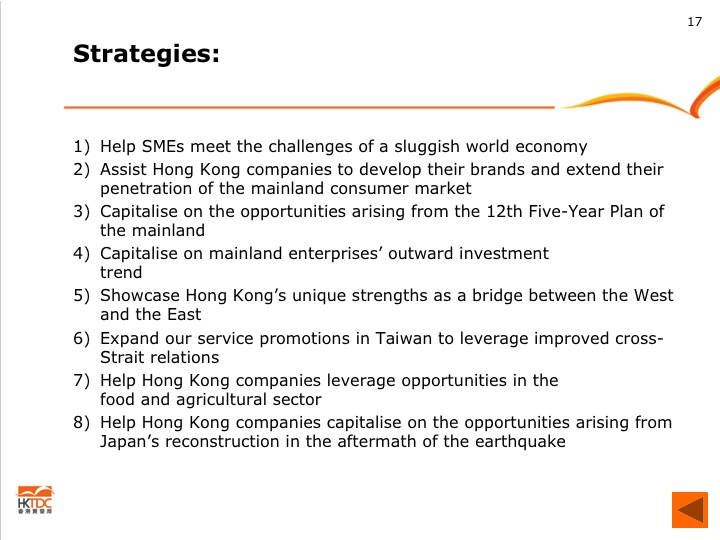 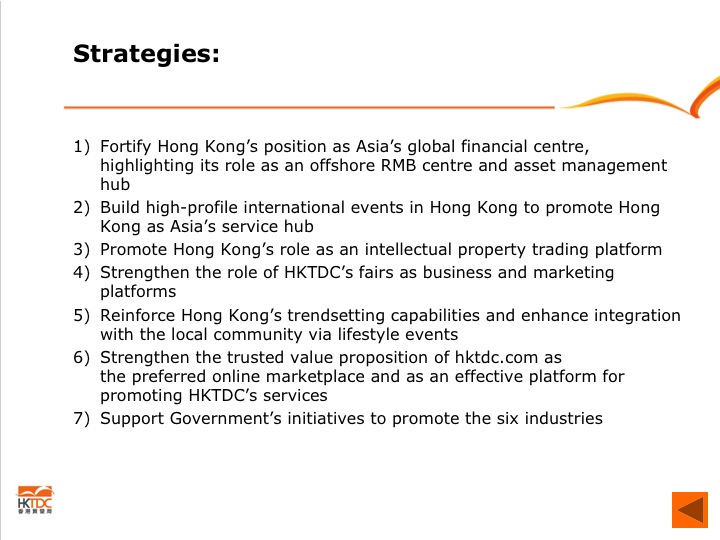 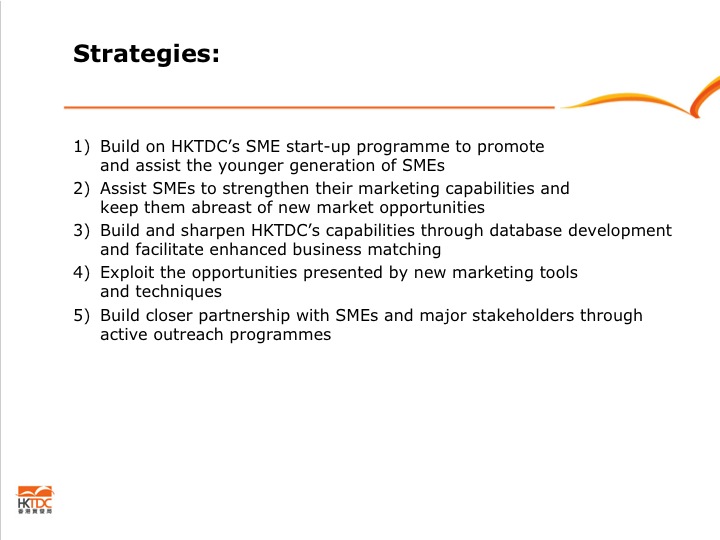 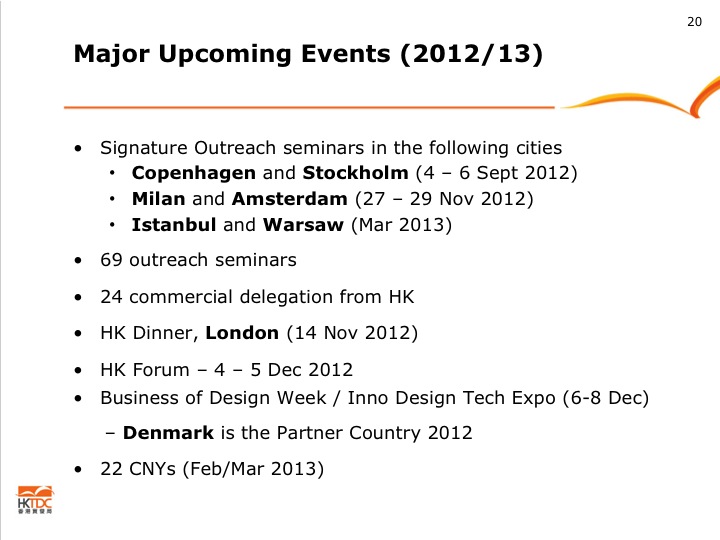 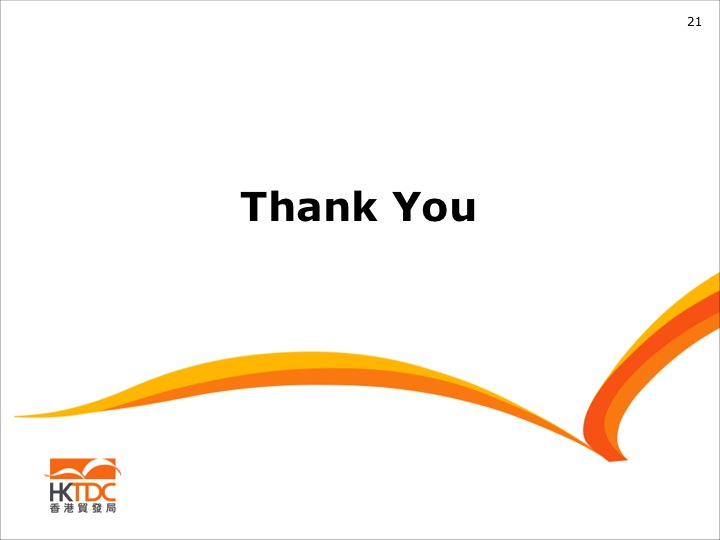 From the International Edition of the Hong Kong Trader, 2 May, 2012

The shipping industry is facing a foul-weather year in 2012, continuing the lacklustre performance of 2011. Drewry Maritime Research, the London-based shipping consultant, believes that the worldwide shipping industry may have lost up to US$5.2 billion last year.

Industry leaders, including shipowners, managers, bankers, lawyers, insurance underwriters and port operators attending the first Asian Logistics and Maritime Conference (ALMC) in Hong Kong last November took a similarly pessimistic view. Widely quoted at the event was the Baltic Dry Index (BDI), which tracks global freight rates. The index was below 2,000 points for most of 2011, after plunging from a peak of more than 11,000 in mid-2008.

The sluggish global economic recovery, caused mainly by persistent uncertainty over the European sovereign debt crisis, is especially hurting demand. Supply problems also loom large, as ships ordered prior to the eruption of the 2008 financial crisis are coming on stream. Even taking into account order postponements, freight rates continue to be depressed.

In fact, the most optimistic view is that the shipping industry's recovery should emerge sometime towards the end of this year. Many are holding out for 2013 as being more likely.

Hong Kong's shipping industry can also expect a tough year ahead. Port statistics show that Hong Kong has been overtaken by Shanghai and Singapore as the world's busiest ports, fuelling questions on whether Hong Kong's maritime sector has lost competitiveness.

Hong Kong's "less busy" rating, the argument goes, would cast a long shadow over the city as an international maritime centre, in light of rapid developments in Singapore's and the Chinese mainland's maritime sectors.

That logic, however, doesn't reflect the real story. While Hong Kong is no longer the world's busiest port, many industry leaders believe a bright future lies ahead for the city's maritime sector.

Hong Kong's maritime industry is conveniently or mistakenly treated as equivalent to the port and related sectors. The latter are characterised as drivers of ocean-going trades, in which container vessels loaded with mainland-sourced cargo from land or river-based transportation are destined for developed markets.

In fact, the port sector forms only a part of the larger maritime cluster. The most important characteristic of a premier maritime cluster is the provision of comprehensive and quality services, including ship brokerage, finance, law, insurance, management and operational services.

Put simply, the maritime cluster as a "value chain" deals not only with the ordering and building of a ship, but also how it's contracted, financed, graded, managed and chartered; how the cargo, as well as the ship (or its construction) are insured, and how disputes are resolved.

The sector involves much more than handling or transportation of cargo. Compared with Hong Kong, which ranks as the world's third-busiest container port, London ranks below 120. London, however, is indisputably regarded as the world's leading maritime services centre.

In China's 12th Five-Year Programme released last year, the dedicated chapter on Hong Kong noted that Hong Kong's position as an international maritime centre would be maintained and strengthened over the coming years.

The slowdown in port activity in Hong Kong, as in the rest of the world, hides the real story on welcome developments in the city (photo: iStockPhoto.com)

Perhaps counter-intuitively, Hong Kong's shipping industry has performed well in terms of the number of businesses and employment, as the world economy made a cautious recovery in 2010, before the Eurozone crisis gathered pace.

Hong Kong's official statistics show the number of establishments engaged in cross-border water transport – including shipowners, ship agents and managers, shipping companies and local offices of overseas shipping companies – increased by some 40 per cent from 323 in 2008 to 456 in 2010.

From a trough in 2006, the number of people engaged in the cross-border water industry also increased by about 40 per cent from 10,110 in 2006 to 14,137 in 2010, indicating an expanding industry despite the worsening external environment.

Save for the slump touched off by the international financial crisis of 2008-2009, business receipts and profits of Hong Kong's shipping industry were also on the increase subsequently. In short, Hong Kong's cross-border waterborne industry coped very well with difficult times, recovering much faster than the BDI.

Among the many reasons for this could be the economic gravity shift from West to East, the surge in intra-regional trade and investment, and the rise of mainland shipowners and shipyards.

For a city to become and retain its status as an international maritime centre, it's imperative to draw upon and sustain professionals to create the necessary maritime services cluster. In fact, only a few cities in the world can maintain such a strong cluster, as a huge demand for maritime services is required to generate business volume.

Due to historical and geographic factors, Hong Kong has been attracting the world's leading maritime service elites to the city for many decades. Hong Kong shipowners ran enormous fleets in the 1980s, with Sir Yue Kong Pao and Chao Yung Tung considered the world's largest shipowners at that time. A good number of international maritime service professionals was attracted to Hong Kong to provide those influential shipowners such services as ship financing and chartering. Geographically speaking, Hong Kong was and still is a major international trading centre, with traders creating enough throughput to induce services.

According to a Hong Kong Government survey, more than 3,700 overseas companies have set up their regional headquarters or offices in Hong Kong, with half of them engaged in import and export trades.

A recent Hong Kong Trade Development Council survey found that most Hong Kong manufacturers and traders sourced products on the mainland, while carrying out sales, marketing, finance and insurance arrangements in Hong Kong. Building on a strong maritime cluster foundation, both shipowners and cargo traders continue to command a strong presence in Hong Kong, helping alleviate the adverse impact of the 2008-2009 international financial crisis on Hong Kong's maritime industry.

Based on the deadweight tonnage reported by the Hong Kong Shipowners Association, their members own, manage and operate as much as nine per cent of the world's fleet. In 2010 and 2011, Hong Kong's import and export trades increased by 24 per cent and 11 per cent respectively, reaching US$910 billion at the end of 2011. In short, Hong Kong's shipping sector is holding a firm course in difficult times.

For more on international trade trends, please see the March issue of the HKTDC Trade Quarterly, which can be ordered at: http://bookshop.hktdc.com/.

But a recent HKTDC survey found the city to be making the most of its position as a leading trade port and services hub. Edward Leung, HKTDC Director of Research, said that approach is likely to hedge against downside risks and maintain Hong Kong's place ahead of Singapore and Shanghai as Asia's top central business district (CBD).

The survey, conducted in the first half of 2012, interviewed more than 500 senior executives from companies based in the Asia-Pacific. Collecting responses from business leaders in 10 cities, the survey looked at impressions about Hong Kong as Asia's CBD, as well as its competitiveness in six industries – merchandise trade, banking and financial services, professional services, intellectual property trading, logistics and tourism and MICE (meetings, incentives, conventions and exhibitions).

More than half the respondents placed Hong Kong ahead of either Singapore or Shanghai as Asia's top CBD. (Some 52 per cent selected it as top choice, and 77 per cent chose Hong Kong for top two choices combined). Of 10 "essential Asian CBD functions" listed in the survey, "marketing and sourcing platform" and "gateway to the Asian market" were considered the two most important, followed by "financial and fund raising centre."

Hong Kong enjoyed a comfortable lead over Singapore or Shanghai in the top three CBD functions, according to the survey. Some 56 per cent of respondents ranked Hong Kong as the top marketing and sourcing platform, 59 per cent ranked it the top gateway to the Asian market, and 60 per cent considered Hong Kong as the top financial and fund-raising centre.

"Respondents were optimistic over the sustained lead of Hong Kong as Asia's CBD over other regional counterparts in the next five years," said Mr Leung.

The survey also found that Hong Kong's lead as a CBD in specific industries widens if the market being considered is Greater China rather than Asia as a whole. Given its prominent role in offshore fundraising for Chinese mainland companies and as the largest offshore Renminbi (Rmb) centre, Hong Kong has a clear lead in serving Greater China with "banking and financial services" (68%), "tourism and MICE" (61%) and "merchandise trade" (60%).

Click to read the rest of the article in HKTDC.