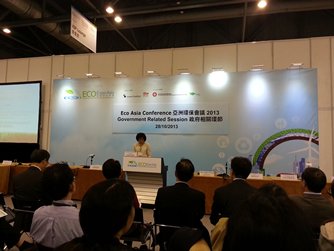 China is keen to apply green technologies to improving its environment, according to many of the exhibitors at this year's ECO Expo Asia held in October 2013 in Hong Kong. Demand for environmental services and equipment on the Chinese mainland is, understandably, being led by the industrial and commercial sectors, as businesses are legally obliged to observe the increasingly stringent green requirements imposed on them by the government. According to the representatives of the Shenzhen-based Dongjiang Environmental Company Limited at the ECO Expo, they are increasingly "going out" to look for foreign partners for green technological cooperation.
Picture: From the Eco Asia Conference of ECO Expo Asia 2013
- Click HERE to read the whole article.

From the Hong Kong Trader - International Edition, 8 May 2013 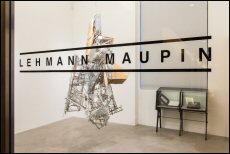 Since launching the business in New York's Soho in 1996, founding partners Rachel Lehmann and David Maupin have launched a second New York gallery. Their inaugural exhibition in Hong Kong, a solo show of new work by Lee Bul, considered the leading Korean artist of her generation, reflects the importance of the Asian region to the global art trade.

"Having conducted business in Asia for well over a decade, we are deeply committed to the region and to the vital relationships we have established with artists, curators, and collectors," said Ms Lehmann. "For us, it was a natural decision to open a gallery in Hong Kong, which is is absolutely the centre of the cultural dialogue for Asia's developing art scene."

October 2013
With abating growth worries in mainland China, reduced risks over the Syrian crisis, and deferred Fed tapering, a better end to the year appears to be in store for Asia.

Global market volatility, however, could return as uncertainties still abound. Political gridlock and brinksmanship in the US could trigger a technical default on US sovereign debt and have economic impacts far worse than that arising from a brief government shutdown or fiscal sequestration. With regard to liquidity conditions, Fed tapering is still on the table later this year. In addition, the structural challenges faced by many emerging Asian countries justify a cautious, though not negative outlook in the region.
Indeed, recent data offer little comfort. The recovery in the advanced economies has thus far provided little benefits to Asian exporters. Hong Kong retailers are also likely to face challenges ahead as Mainland travellers may be less enticed to visit Hong Kong under the country's new tourism law.
All in all, the Hong Kong economy will improve from its lackluster 2012 performance, but no strong rebound is expected. Our forecast is for a mild deceleration in GDP growth in the second half to slightly below 3%. With the local economy having expanded by 3.1% in the first half, however, a full-year growth of 3% is still within reach. 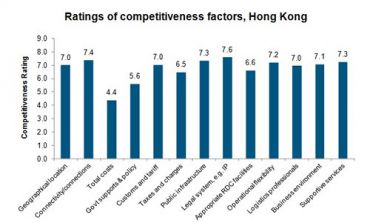 Overall, 396 out of a total of 425 responding logistics service providers (LSPs) and cargo owners (COs) rated Hong Kong, an attempt ratio of 93%. In the stand-alone question on the overall competiveness of Hong Kong as an RDC, it received an average rating of 6.51 out of the nine-point scale on Hong Kong. There are many factors bolstering Hong Kong's competitiveness as an RDC. Among the more important ones, respondents picked the legal system (7.6), public infrastructure (7.3), connectivity and connections (7.4) and support services. Hong Kong is less competitive in total costs (4.4), below the mid-point of the nine-point scale. Total costs include land and rental cost, labour cost and operating cost (separate ratings of each of the three cost components was sought but are not shown in the figure).
Read more in HKTDC Research.