Dai Xianglong, Governor of the People's Bank of China from 1995 to 2000, says that while there is no timetable for renminbi convertibility, China will continue to loosen its grip on financial markets to pave the way for full convertibility.

Mr Dai, Chairman of the National Council for Social Security Fund, says the first step for the Chinese currency would be to see exchange and interest rates respond to the market.

You have spoken about prospects for the renminbi becoming fully convertible over the next three to five years. Do you believe China is well-prepared to open its capital account?

On this issue, it is impossible to set a timetable. We can only map out steps to take. We think convertibility of the renminbi has improved a great deal. Under International Monetary Fund rules and regulations, there are seven areas to make the capital account convertible that is covered by 43 provisions.

According to the State Administration of Foreign Exchange, our capital account has now achieved 75 per cent openness. And that's before you include areas that are already essentially open. If we count those areas, the rate should in fact be higher.

The remaining unopened areas are mainly security investments and foreign debts. Looking forward, we will further open in the security investment area. For instance, China will allow more Qualified Foreign Institutional Investors (QFII). We will continue to expedite this process by working out more measures.

First, the currency's exchange and interest rates need to respond to the market. Second, we will further develop the capital market. Third, we will build more overseas branches for Chinese financial institutions, which will provide renminbi transaction services for the capital account. 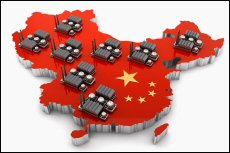 Companies that moved to other parts of Asia now find wages rising quickly on the back of investment growth (photo: iStockPhoto.com)For the past three decades, the Chinese mainland has been a global manufacturing winner, thanks to its low-cost advantages. But times have changed, mainly because of the mainland's soaring labour costs. The question now is whether it has more to offer than price competitiveness.

The answer is a resounding "yes," as the mainland steadily replaces older industrial models with higher value offerings, particularly in the IT and consumer electronics sectors. All this is a far cry from government support policies for low-cost industries, when the mainland attracted thousands of multinational companies to produce for Western consumption.

The mainland's share of global manufacturing exports soared from 1.8 per cent to 15.4 per cent in just 21 years, from 1990 to 2011. But its rapidly rising wage levels forced multinational companies to review their sourcing strategies. With rising transport costs, increasing business uncertainties and supply-chain complexities, a number of companies have started to "re-shore" some manufacturing capacity back home and move additional capacity from the mainland to other low-cost countries.